A recent fact-finding mission by regional human rights groups in the south-western island of Palawan, the last ecological frontier of the Philippines, has revealed a pattern of land grabs and forest destruction by palm oil companies, partly owned by Malaysian and Singaporean investors.

Motalib Kimel, Chairman of the local Coalition Against Land Grabbing (CALG) and himself a Taganua leader from Palawan, said:

‘The palm oil company AGUMIL is taking over our indigenous peoples’ lands through forced and fraudulent land sales. It is quite contrary to national laws. We are losing our lands and our livelihoods. We are calling on the Philippines Government to uphold our rights.’

The appeal was taken up by a regional team of human rights experts, attending the 5th South East Asian Regional Conference on Human Rights and Agribusiness, some of whom visited the affected villages and heard testimony from the farmers and indigenous peoples.

‘The company has been taking land without the mandatory Free, Prior and Informed Consent of the indigenous peoples and without our involvement as required by law. In view of these violations NCIP has the power to issue a restraining order upon filing of complaints by indigenous impacted communities, in order to halt the company’s operations while the case is dealt with by the courts.’

The fact-finding team found that AGUMIL, and other oil palm companies, have been acquiring lands contrary to community wishes and in violation of their rights, with the alleged complicity of local government officials. The land grabs are depriving the indigenous communities of their food security, dislocating them from their culture, and driving them into further poverty.

John Mart Salunday, a board member of CALG and President of NATRIPAL, the federation of indigenous peoples in Palwan, said:

‘It is like people in the impacted oil palm communities are dying little by little because they no longer have the plants needed to cure themselves. Before they only walked half an hour to get the raw material for building their houses, for their artifacts and medicinal plants.  Now they have to walk half a day to the other side of the mountain before they can find the plants they need.’

Forests are being cleared contrary to law. In some areas, AGUMIL’s managed cooperatives have imposed unexplained and heavy debts on communities and these debts are being maintained in ways resembling debt slavery. Welly Mandi, CALG’s secretary, says:

‘We are being strangled by huge debts with both Agumil and the LandBank [the key financier of oil palm development], and our land titles are being withheld by the bank  as collateral.’ 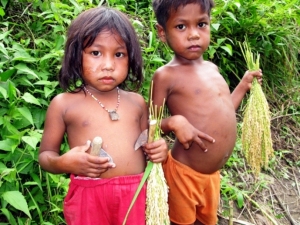 Moreover, AGUMIL and other oil palm enterprises have bypassed with impunity regulations of the Department of Environment and Natural Resources (DENR) and those relating to Strategic Environment Plans (SEP), and have only obtained environmental clearance for their seedling nursery and oil mill area but not for the 7,000 hectares so far converted into oil palm plantations.

Marcus Colchester, Senior Policy Advisor of the Forest Peoples Programme which co-convened the conference along with CALG and the Commission on Human Rights of the Philippines noted:

‘Having reviewed some of the available documents and official maps, it seems clear that local officials of the DENR are implicated in this process. Tragically we find such cases all through South East Asia where oil palm expansion is occurring. The Philippines has some of the best laws in the region that protect indigenous peoples’ rights but they are being ignored by local officials.’