ONE STEP FROM LEGALIZING THE SURRENDERING OF COASTAL SOVEREIGNTY 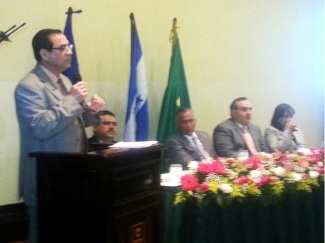 No matter how pretty you paint it, a fetid smell emanates from the new Law

On August 14, 2013, in a pompous ceremony the “Law of Fisheries and Aquaculture Act” was signed by executive and legislative officials of the government of Honduras. Representatives of the “Association of Fishermen of the Gulf of Fonseca” (APAGOLF),  stood up outraged moments before the signing. One of them spoke up without following protocol and demanded respectfully but firmly that the law not be signed as no real input from the civil society had been sought.  It also would privatize fishing and leave it on a few hands eliminating small fisherfolk. It would relinquish seas, rivers, lakes, and wetlands to the oligarchy and transnational corporations. It would mock mestizos, indigenous people and Afro-Honduras. The main table was surprised and perhaps embarrassed.  It played down the “Law” and answered that congress members allied with Juan Orlando´s National party, members of the Liberal party and “others” were in charge of passing it. No one disputed the explanatory and accusatory arguments.  They signed and delivered it to the Secretary of Congress who seemed to smell something foul in that law.

A signed document had previously been delivered by all the organizations in the Gulf of Fonseca. It was not taken into consideration, and in this painful occasion another signed document with APAGOLF´s position was delivered. Both documents are consistent with the recent Chilean fisherman leader Cosme Caracciolo´s condemnation of the new Fishing Law approved in Chile. The fact is that “PescaChile”, a subsidiary of the transnational “Pesca Nova Spain” (also “Fishing Nova” in Honduras) managed to appropriate several fishing resources thanks to the new Fisheries Act. It not only acquired property rights over much of the fishing resources that exist in Chile, but also, the company in question obtained the power to count among its financial assets or capital-precisely these quotas,which it can now sell, swindle, mortgage, transfer, in sum, to make any speculative business. Fishing quotas used to be set by the State through a kind of temporary concession and did not constitute property rights for future appropriations. Today they no longer belong to us. They are no longer a matter of the State.  They are a business matter between private individuals.

“Today Pesca Chile as legal representative of Nova España is in bankruptcy. The most tragicomic aspect of the matter is that the most important of its “assets,” of its capital, are the fishing rights the Chilean government gave them with the full consent of many “honorable” congress members and several fishing leaders paid off by the fishing industry.  The State that many still imagine no longer exists. If it did, instead of giving away our natural and fishing  resources to large foreign capitalists, it would have promoted the good nutrition you get from seafood.  This seafood would stay home to feed its people and its neighbors. Today we, the real artisanal fishermen, demand the repeal of the law, not only because it relinquishes fishing rights to life imprisonment-renewable for twenty years, but also because it prolongs the food poverty in our country, emphasizing irrational gains and nepotism.”

(If you are interested in the topic, see my earlier publications (3) in http://www.elheraldo.hn related to USAID, World Bank and G8).

And about the mockery made of us by declaring an artisanal fishing preserve zone three kilometers off the coast of the territorial sea, then expressing that shrimp trawling can be done in the preserve, we cite the recent decision by the Costa Rican Supreme Court who on August 7, 2013 declared unconstitutional industrial shrimp trawling because that fishing technique causes serious harm to the marine environment and to the marine life incidentally captured but not used, and the negative effects on benthic areas of the oceans.” It also “adversely affects sustainable democratic development as it reduces fishing possibilities for artisanal fishermen” to the degree that FAO compared trawling with the “clear cutting” of a forest.

“In Honduras, if members of Congress, before taking the next fatal step to approve a submissive Law, stopped to think about their motherland and its poor people, they would not  despoil more of its natural riches.  But based on previous “deliveries” they have made, it seems that this Congress is a slaughterhouse where dehumanized butchers cut into pieces the country as if it were a cow.

(Read more at: jorgevarela.me) – This post is also available in Spanish: https://iccaconsortium.wordpress.com/2013/08/30/a-un-paso-de-legalizar-entrega-de-soberania-acuatica/